Malta is a southern European country in the Mediterranean Sea 80 km (50 mi) south of Italy and 333 km (207 mi) north of Libya. Malta’s location has given it great strategic importance throughout history and a succession of powers have ruled the islands. Malta gained independence from the United Kingdom in 1964 and became a republic in 1974. Malta is a tourist destination with numerous recreational areas and historical monuments, including nine UNESCO World Heritage Sites. 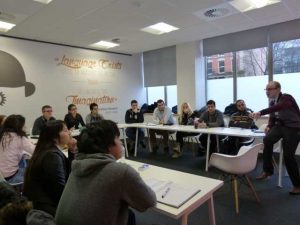 Higher education was introduced in Malta and influenced by the British education system, of which they once were a part. In 1996, computers were introduced, creating great change in the university environment and opening many doors to careers in fields such as computer information systems, technology, and advanced programming. The highest educational institution in Malta which offers Bachelor of Science degrees is the University of Malta. It is a member of the Association of Commonwealth Universities and is the single institution of higher education in the area. Admission to the university is determined by Matriculation exam results for students wanting to pursue career paths in most fields, but can be based on the level of maturity and experience in fields such as the Arts and Sciences. The university system is divided into 14 different faculties and areas of study including the Arts, Education, Engineering, Law, Medicine, Media, and Technology fields.)

Because of the large amount of detailed documentation required by the Immigration Department in Malta, it is important that students gather all of this information several weeks or months prior to planning to attend, so that nothing will be missing that could hold up the process. As long as the paperwork is in order, a student visa is usually granted without further delay.

Highlights of Studying in Malta